Spring is in sight!! - Charlotte Clewlow

This year began with a fantastic week in France skiing with the family – it was nice to have a break and then lovely to come back home with spring in sight!!

I have had a busy time since with riding, clipping, farrier and osteopath visits.

My first outing was to Kelsall Hill Arena Eventing which was amazingly dry and not too cold of a day. 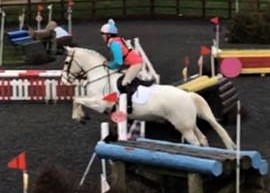 Gunther had his Arena Eventing debut he was great and just got 4 faults.

Flower did a beautiful double clear for 5th place (just 1 second separated 1st - 6th) and Basil was on form too with a great double clear. A lovely first outing of 2017.

My  first dressage outing of the year was also to Kelsall Hill, with Flower who did a much-improved test but I don’t really think dressage will ever be her forte and Basil who did a lovely calm test. Lula had her debut dressage outing – she was a little superstar doing a lovely test.

Lula had her 2nd dressage outing with Izzy to do a 65% test and take 3rd place – a seriously talented pony.

A couple of British Showjumping outing's to Southview with Flower and Basil got them both SCOPE qualifications with lovely double clears coming 2nd and 3rd, Flower just beat Basil by 0.2 secs!!

They have also completed half their qualifications for a 2nd class at SCOPE , again great double clears for 4th and 5th places, Flower beating Basil by about 1 second this time – speedy cob!

Superstar Paddy is back from his holidays and has now been shod, clipped and his back has been checked – he is doing lots of hacking to get fit, ready for the season. He is really happy to be back in his PJ’s and loves all the attention.

All my horses are looking and feeling fantastic thanks to Rowen Barbary – Joey looks amazing – he has lived out so far this winter and is still enjoying being a happy hacker! Paddy has maintained his weight whilst on holiday – an achievement in itself. Basil just looks great, a lovely shiny coat and a very happy horse and Lula has gained condition and shine!

All have been fed on Rowen Barbary ReadyMash Extra – although due to them doing so well I now have them on the ordinary Ready Mash.